Often an Ungrounded Electrical Receptacle is found in older homes.  The grounding of electrical receptacles (which some laypeople refer to as outlets) is an important safety feature that has been required in new construction since 1962, as it minimizes the risk of electric shock and protects electrical equipment from damage. Modern, grounded 120-volt receptacles in the United States have a small, round ground slot centered below two vertical hot and neutral slots, and it provides an alternate path for electricity that may stray from an appliance. Older homes often have ungrounded electrical receptacles, two-slot receptacles that are outdated and potentially dangerous. Homeowners sometimes attempt to perform the following dangerous modifications to the ungrounded electrical receptacle : 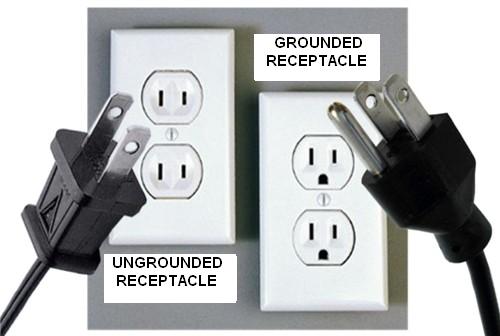 While homeowners may be made aware of the limitations of an ungrounded electrical receptacle , upgrades are not necessarily required. Many small electrical appliances, such as alarm clocks and coffee makers, are two-pronged and are thus unaffected by a lack of grounding in the building’s electrical system.
Upgrading the system will bring it closer to modern safety standards, however, and this may be accomplished in the following ways:

In summary, adjustments should be made by qualified electricians — not homeowners — to an electrical system to upgrade ungrounded  Electrical receptacles to meet modern safety standards and the requirements of today’s typical household appliances.