Hand-dug wells are ground excavations and their associated structures used to access groundwater in underground aquifers. Until modern times, all artificial wells were hand-dug. 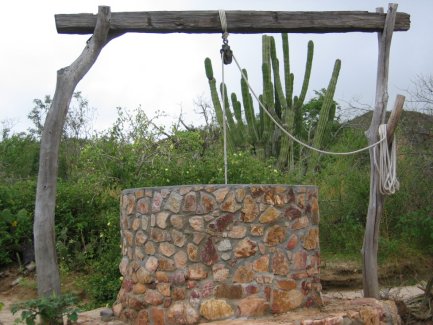 Building a hand-dug well can pose serious safety hazards, such as the following:

Hand-dug wells are typically constructed during dry weather for several reasons:  the water table will be at or near its lowest level, allowing the required depth to be adequately determined; and dry soil is less likely to collapse during excavation. 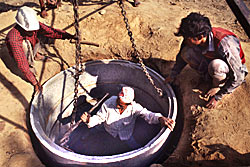 Wells should be placed where large supplies of clean groundwater are likely to be available. Water may be delivered using a rope and bucket, but these components are usually mere stylistic elements, while water is typically collected using a modern pump. A layer of gravel may be placed at the bottom to prevent the soil from silting up. Any concrete used should be properly mixed and allowed to cure to ensure its strength and longevity.
Protection against cave-ins should be a concern during construction of hand-dug wells, especially in unstable soil. Workers can excavate within pre-cast concrete rings that later become the permanent lining to the well’s sides. Vertical, close-fitting timber boards supported by steel rings may also provide protection against cave-ins.
Safety Considerations for Use

No one should be allowed to enter the well without a safety harness and supervision.

In summary, hand-dug wells pose unique challenges, but when properly constructed, maintained and inspected, they can be picturesque and advantageous.