A Gravity furnace is a heating unit and related equipment that employ gravity to move warm air throughout a building. These antiquated furnaces were installed from the late 1800s to the mid-20th century and are still found in use in some older buildings. 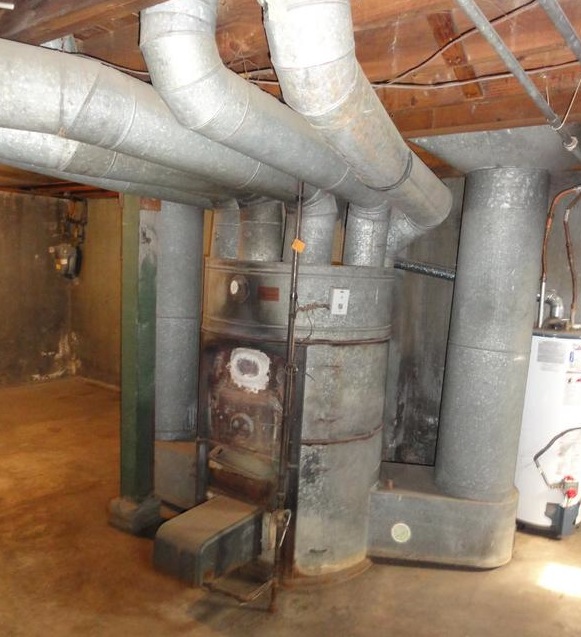 Their design is simple:  fuel is inserted through a door into the combustion chamber, which heats the surrounding air before it rises into the upper levels of the dwelling through ductwork running throughout the walls and floors of the building. Vents that are strategically attached to the ductwork allow the hot air to escape into the rooms of the home. This design is sometimes referred to as an “octopus furnace.”

Originally, gravity furnaces only burned coal, although many were eventually converted to run on newer fuel sources, such as oil, natural gas and propane. The combustion-air and venting requirements are the same in gravity furnaces and forced-air furnaces, and the heat exchanger is similar. Gravity furnaces are larger than forced-air systems, however.  They have fewer moving parts (which may account for their longevity) and they lack a blower fan. Without a blower fan to force air through a house, the furnace is quieter than modern systems, it kicks up less dust, occupants notice fewer hot spots around the vent, and the flow of warm air into the room is less forceful and obvious.
These advantages are slight in comparison with the following drawbacks of the system:

Inspection may also include the following defects:

Functional gravity furnaces, despite their limitations, do not need to be replaced. Replacement is usually recommended, however, because units still in operation today have surpassed their life expectancy, and they lack the clear advantages and safety of modern forced-air heating systems.

In summary, gravity furnaces are inefficient and obsolete, although they still perform acceptably where they exist in some older buildings.