Are my electrical wires safe

Poorly installed and maintained electrical cables are a common cause of electrical fires in homes. Many older homes contain wiring that is now considered obsolete or dangerous. InterNACHI inspectors should understand the basic distinctions between the different types of cable systems so that they can identify unsafe conditions. 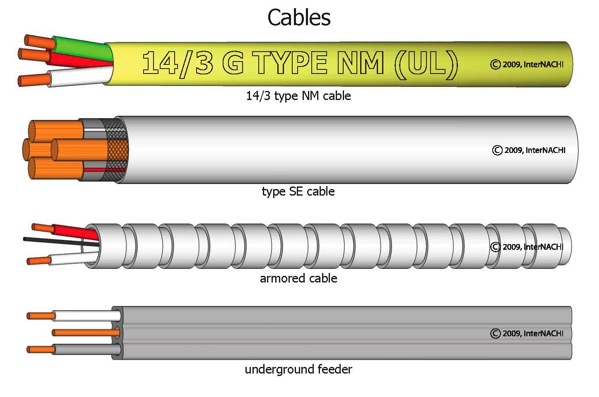 Romex Cables
Romex is the trade name for a type of electrical conductor with non-metallic sheathing that is commonly used as residential branch wiring. The following are a few basic facts about Romex wiring:
The following NEC regulations apply to Romex conductors:

Note:  Some communities have never allowed the use of Romex wiring in residential construction. Armored cable is typically used in these communities.

Armored Cables (AC)
Armored cable (AC), also known as BX, was developed in the early 1900s by Edwin Greenfield. It was first called “BX” to abbreviate “product B – Experimental,” although AC is far more commonly used today. Like Romex cables, they cannot be used in residences higher than three stories, and the rules for protection and support of AC wiring are essentially the same as the rules for Romex. Unlike Romex, however, AC wiring has a flexible metallic sheathing that allows for extra protection. Some major manufacturers of armored cable are General Cable, AFC Cable Systems, and United Copper Systems.
Service Entry (SE) Conductors 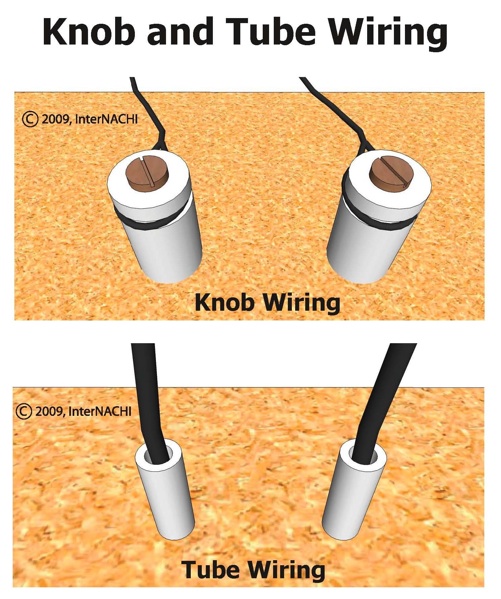 These cables begin at the splice and enter the meter. They are not permitted inside homes, with the exception of “style R” SE cable that can serve as interior wiring in branch circuits for ovens and clothes dryers. Style R cables should be clearly marked on their jacket surfaces.
Knob-and-Tube (KT) Wiring
Most houses constructed prior to World War II were wired using the knob-and-tube method, a system that is now obsolete. They are more difficult to improve than modern wiring systems and are a fire hazard. Knob-and-tube wiring is supported with ceramic knobs, and runs intermittently though ceramic tubes beneath framing and at locations where the wires intersect. Whenever an inspector encounters knob-and-tube wiring, s/he should identify it as a defect and recommend that a qualified electrician evaluate the system. The following are a few reasons why inspectors should be wary of this old wiring system:
In summary, inspectors should understand the different types of conductors that are commonly found in homes.